— Swapped and residing in Gerona, Spain —

“The seasonal urge is strong in poets. Milton wrote chiefly in winter. Keats looked for spring to wake him up (as it did in the miraculous months of April and May, 1819). Burns chose autumn. Longfellow liked the month of September. Shelley flourished in the hot months. Some poets, like Wordsworth, have gone outdoors to work. Others, like Auden, keep to the curtained room. Schiller needed the smell of rotten apples about him to make a poem. Tennyson and Walter de la Mare had to smoke. Auden drinks lots of tea, Spender coffee; Hart Crane drank alcohol. Pope, Byron, and William Morris were creative late at night. And so it goes.”
― Helen Bevington

I participated in a Sketch Swap organized by the Urban Sketchers group. I was paired up with someone from Gerona, Spain and I received his painting today in the mail. It was such a great feeling to receive it — he actually sent me a video, and a nice historical explanation of his city.

So the following painting is the one that I sent him. The architecture of the house is a typical “vernacular” or cottage type house with two slopes. Neoclassical style, around 1825, 1-1/2 stories, with symetrical opening. The floors are usually very close to the earth (no basement) with a bas-côté named “tambour” in French.  When settlers arrived in Canada, there were alot of trees… so all of our architecture is wood-based, especially houses that lie in the countryside. This house was painted on location in Coteau-Landing, Québec, Canada and is on a very quiet side road where not many cars or humans, go to. It is very typical of our older houses. 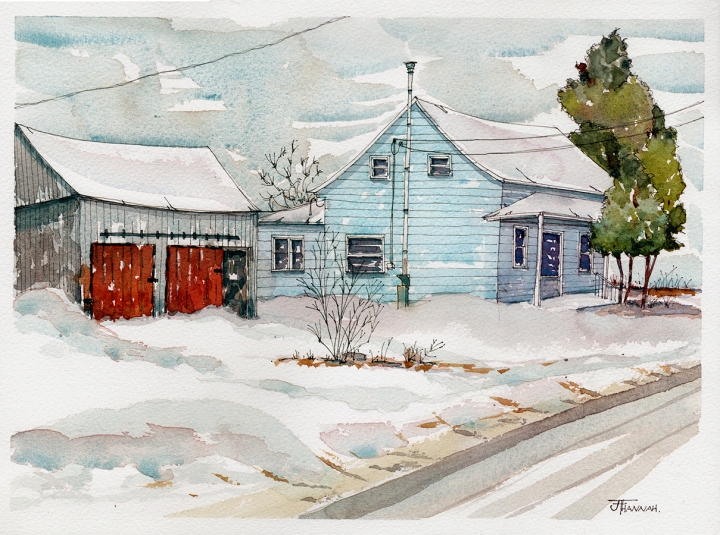 For the Urban Sketchers workshop today we first drew in Place Jacques-Cartier and then moved on in front of the Marché Bonsecour. This building was built in 1860, was used as the main public market in those years, then housed City Hall, then the parliament of United Canada, and nowadays acts as a multi-purpose facility, with exhibition rooms, houses outside cafés, boutiques and restaurants. As you can see I did not have the time to scan my painting properly and just photographed it, thus the edges. I really struggled with my colours today… as I did not have the colours in my eyes. It is a strange thing to say, but some days you automatically know which colours to use, is almost instinctual. However, I have to say that my drawing went well… so I am happy with it! Pour l’atelier d’aujourd’hui, nous sommes allés à la Place Jacques-Cartier, et ensuite face au Marché Bonsecour en après-midi. Ce marché date de 1860 et fait partie du patrimoine québécois et canadien.  Aujourd’hui je n’avais pas la couleur dans mes yeux… c’est peut-être drôle à dire, mais quand je l’ai, je sais instinctivement quelles couleurs que je dois mettre, où, comment et pourquoi. Aujourd’hui mon dessin a bien été, mais les couleurs… ouf! C’est pas grave, car je suis quand même contente du résultat. Colours: Yellow Ochre, French Ultramarine, Burnt Sienna Paper: Moleskine Watercolour Sketchbook

This morning we regrouped 30 urban sketchers coming from the USA, British Columbia, Ontario and Quebec. We started in Old Montreal and then moved onwards to the Mary Queen of the World Cathedral, which has such a beautiful name and dome. It was funny as two men started talking with Laurel, and they told her: “We live there!” I turned around to realize that they were priests. They were kind of cool looking. Our instructor was Marc Taro Holmes and I hopefully applied his teachings in this painting. (Mom, I sure hope that you like it as I know that you love this cathedral -))

Four Urban Sketchers of Montreal gathered together today to paint in Place D’Armes in Old Montreal. Place D’Armes is the second oldest public site in Montreal and dates back from 1693. In front of us was the Notre. Dame Basilica gothic revival style architecture (1672), Saint. Sulpice Seminary (1657) which is the oldest edifice in Montreal, the Bank of Montreal’s head office  (1817) which is the oldest bank in Canada, New York Life Insurance building (1887) and finally the art deco Aldred building (1931) which resembles the NYC Empire State building which was completed in the same year. Even though I painted parts of some of these buildings and roofs, it architecture surrounding us was quite impressive and beautiful.

I have not painted nor drawn for more than a week and I felt quite rusty… and painting today did its amazing work and quieted and soothed my mind while creating a balm for the soul… which has been in a whirlwind of thoughts and of letting go’s. Last Sunday, my beloved 88 year old scottish father Dorland died, letting his head fall on my Mom’s shoulder during Mass at the Notre. Dame de Lourdes Sanctuary in Rigaud.
___________ 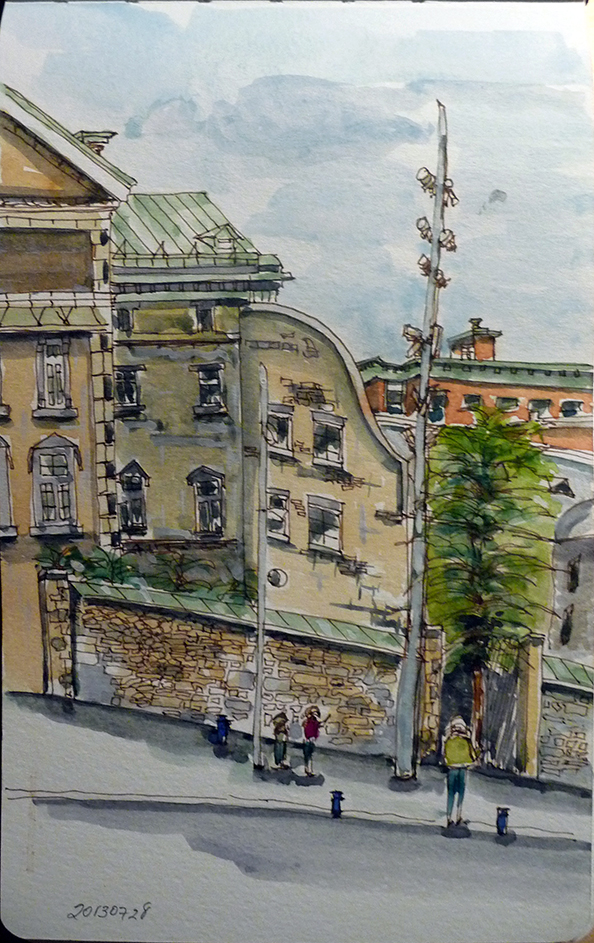